2020 Healthcare Predictions in Asia-Pacific: Looking Back to Look Ahead

Demand for healthcare in the Asia-Pacific region is growing rapidly. This is especially true given its rising aging population (the number of elderly people in Asia by 2030 will increase by 200 million, or 71 percent) and as governments continue to roll out ambitious universal health coverage schemes (which have been seeing recent success in countries such as India, the Philippines, Thailand, and Singapore). However, much healthcare in the Asia-Pacific region is inefficient, something many people there still cannot afford. Governments and healthcare organizations need continued acceleration in the pace of Asia’s healthcare transformation to address the “silver tsunami” and widening socioeconomic inequality.

Moves to boost efficiency could raise care quality and make it more affordable across the region, helping governments meet demand with limited budgets. Important trends include innovation and new investment types – like out-of-hospital means of delivering healthcare and alliances between providers, research institutes, and high-tech firms.

As we enter into a new year (and a new decade), we’d like to take this opportunity to pause for a moment in reflection and revisit our 2019 Asia-Pacific healthcare predictions, which touch upon the aforementioned ideas, to see whether we got them right. And, below we also present our 2020 healthcare predictions for the region. In short, we expect an increasing confluence of several trends in the region: ecosystem plays, reforms to universal health coverage systems, and innovative breakthroughs.

A Look Back at Our Four 2019 Predictions

Governments that have been developing universal health coverage programs have made progress towards these despite some slow starts. The Philippines, for instance, after passing its Universal Health Care (UHC) Act, released the rules and regulations to implement this, including a shift towards DRG pricing. But it’s clear implementation will take several years. India, as another example, is still rolling out “ModiCare”, the world’s largest government-funded universal health coverage scheme. Officially launched in 2018, it aims to provide quality care to millions without prior health coverage. And in Singapore, the Ministry of Health (MOH) recognizes the importance of shifting to value-based healthcare, where providers are paid based on patient outcomes. The country is exploring initiatives such as value-based financing through bundle payments and hospital-to-home programs.

Overall, progress has been slow in 2019, but in many countries the political will remains to keep this item on the agenda.

Although some progress has been made this year in Asian research and development (R&D) and innovation, breakthroughs continue to be concentrated mainly in China and Singapore. China is leading the way in surgical robotics. Surgeons in Beijing Jishuitan Hospital, for instance, started using the TiRobot system to create surgical pathways using 3D scans. In Singapore, a team of hospital clinicians, academics, and researchers at A*STAR (the Agency for Science, Technology and Research) are fighting antibiotic resistance using portable DNA sequencing technology, assembling novel resistance gene combinations, and extracting genome sequences from metagenomic data. Also in Singapore, the fifth annual Asia Pacific MedTech Forum 2019 showcased regional advances in artificial intelligence (AI) and robotics for cancer detection.

Global organizations have continued to invest in Asia as an innovation hub. Multinational corporations have set up research institutes and strategic partnerships in Asia, including arrangements to contribute data for medical studies with academic institutions and healthcare organizations. These moves signal a continued interest in Asia as a center of innovation. But the region will continue to compete with other global hubs for investment in commercial R&D and leading-edge academic studies.

Cyber-attacks continue to be potential risks even for relatively advanced countries like Singapore and Australia. In February, Singapore was hit by another cyber incident, when more than 14,200 people had their medical from Singapore’s HIV Registry stolen and leaked online. That leak came less than a year after a major data breach at SingHealth affected over a million citizens’ data. In Australia, an alarming 105 breaches were reported by health service providers in the first half of 2019. In addition, US cancer research institutes were reported to have been targeted by Chinese hackers.

These risks will continue as all healthcare data are digitized. Several countries, including Indonesia, have shored up their cyber security regulations and defences. But in many cases the measures are insufficient to deter threats. Asia will surely need to address this growing threat to continue the pace of digitization needed to increase efficiency and data collection – but we will need to ensure benefits outweigh risks.

Cross-industry collaborations are multiplying, particularly in digital health, and activity in the ecosystem has recently shifted from the realm of ideas to that of actual partnerships. Across the region overall, several new partnerships were formed, and governments included more digital players to complement traditional care providers. Several local start-ups have expanded their regional footprints, such as Singapore’s DoctorAnywhere, which has partnered with Vietnamese payments platform ViettelPay to provide virtual clinics in Vietnam. Insurers are continuing their transition from payers to partners, while banks are co-creating healthcare ecosystem platforms. In Thailand, Siam Commercial Bank has partnered with virtual hospital Samitivej to provide high-net-worth clients with access to digital healthcare services.

In the public sector, collaboration use cases are coming to fruition. In Indonesia for example, the national health insurance authority BPJS (Badan Penyelenggara Jaminan Sosial) will add Halodoc’s digital health services to its BPJS app. As another example, Singapore announced extension of its partnership with Fitbit beyond devices to include coaching services. In addition, the second Oliver Wyman Health Innovation Summit, Asia Edition, was held this year in Singapore where cross-industry incumbents convened to discuss building ecosystems for impact.

Progress will continue in the above areas, which will remain relevant in the near future. In the meantime, here is our view of what to expect in 2020: 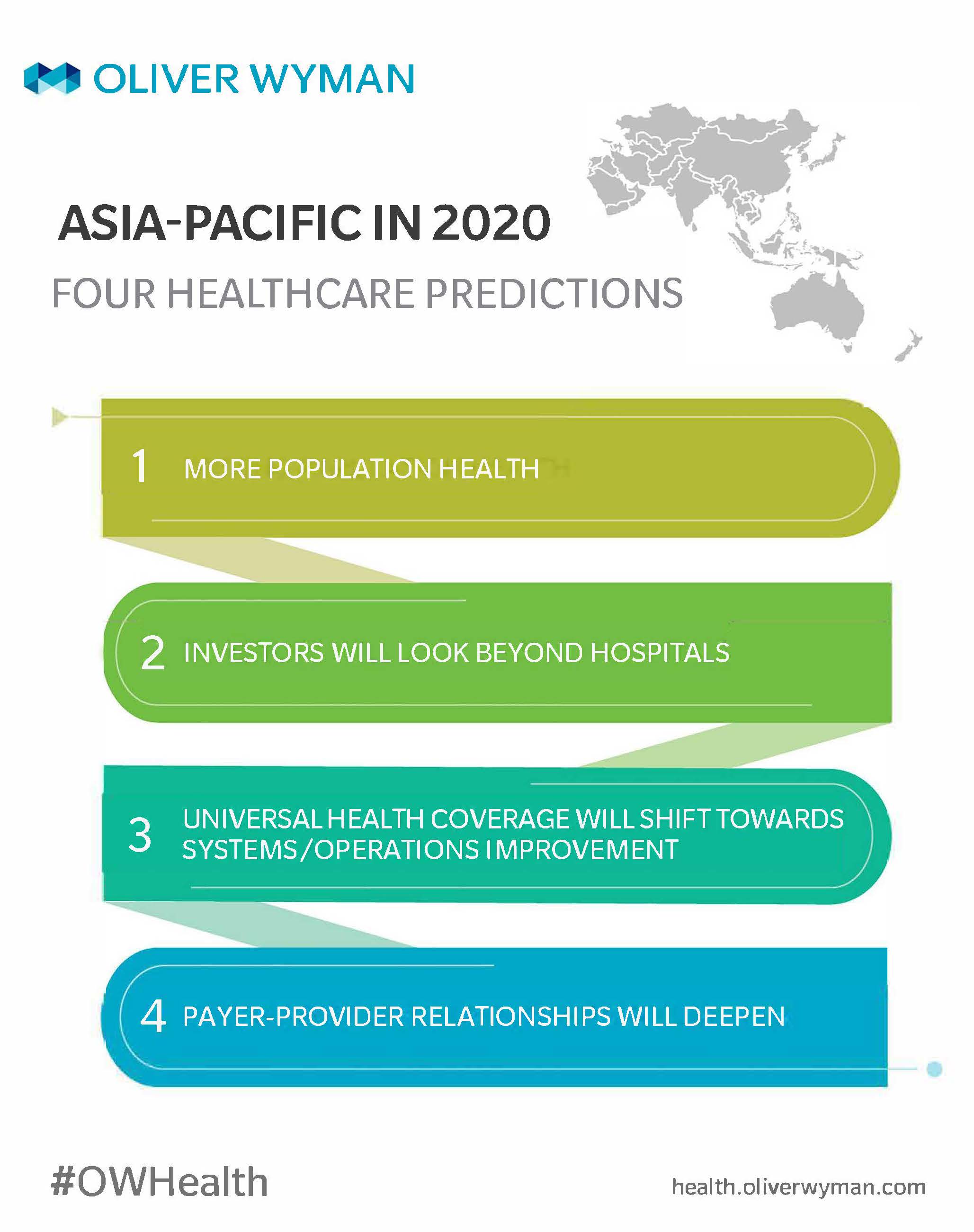 As health data on populations become increasingly available, we expect a greater interest in precision public health and the formation of population health initiatives. By leveraging aggregated data and analytics, the unit of analysis and intervention will shift from populations to individuals. Precision public health creates a new ecosystem bringing together public and private stakeholders, with a particular emphasis on data sharing and research. Singapore will likely be a hub for such innovation as it seeks to expand targeted health interventions – for example, as part of its SmartNation digital enablement initiatives.

Prediction 2: Investors Will Look Beyond Hospitals

Hospitals will likely still be considered as healthcare investment flagships. This is because of several reasons, including: high margins, a fragmented market, moderate competition, and consolidation that provides quick wins. However, there may be fewer big-ticket deals available in the region after a high-profile year for hospital investment. For instance, TPG Capital bought Columbia Asia for $1.2 billion, and KKR and GIC Singapore invested in Metro Pacific Hospital Holdings in the Philippines for $685 million. We believe investors will be increasingly willing to buy new categories of assets, in particular out-of-hospital care for specialities such as in vitro fertilization (IVF), optical care, and dental care. Facilities are less capital intensive and the regulatory and reimbursement risks are lower. The investment strategy would consist of consolidating these into bigger networks and platforms. Greater focus on such assets could result in smaller but more frequent deal sizes over time.

Ancillary service providers will come onto investors’ radar. Business-to-business solution providers are an opportunity for investors to participate in important healthcare sectors where the incumbent insurers and pharmaceutical companies have already been captured by multinational corporations. These include third-party administrators (TPAs), revenue cycle managers (RCM), distributors of medical and life-science products, and commercial solutions providers. These business-to-business firms tend to use long-term contracts, which provide stable cash flows for investors.

The big political wins in universal health coverage are over and done. Now it’s time to put them into effect. Governments will need to focus on sustainability as they look for ways to increase funding and maintain a track record for successfully implementing their key pillars. We expect digital solutions will be one way to address brick-and-mortar healthcare shortfalls in emerging Asia, as they have been in 2019. Governments will also double down on data capture and technology improvements to unblock various systemic barriers, but this will depend on the capabilities of the solution providers in the region. However, this is a long journey, and progress will continue to be slow. We expect small steps this year, not big bangs.

Payer-provider relationships have traditionally been defined by one metric: reimbursement. This will continue to be the focus, especially as public health systems move away from pure fee-for-service payment and into packages, case rates, and the publication of fee benchmarks for common procedures – as has happened in Singapore. For private insurers, this will lay the groundwork for establishing reasonable, customary rates. They can then use their performance in benchmarking as an alternative to discounts as they try to attract customers.

Though private insurers have entered care services directly in the US, this is unlikely in Asia. However, there may be new modes of collaboration, and we expect an increase in incentives to adopt telehealth and other "new front doors" to healthcare, such as retail clinics and virtual hospitals.

Overall, this could be a win-win proposition for both insurers and providers, as it will let them tap into a growing base of virtual users. Regional second-opinion networks could play a valuable role in helping to manage patients with chronic conditions across borders.

In partnership with Marsh & McLennan Insights and BRINK, we will continue to shine a spotlight on the major themes in Asian healthcare throughout 2020.