How Natural Gas Can Weather The Pandemic

This article was first published on April 7, 2020


As the COVID-19 pandemic evolves and timeframes for school and non-essential business closures continue to extend, the Natural Gas sector in North America faces potential volume drops and price fluctuations as power generation declines and the oil price wars play out.

In early March, gas production was up 10 percent compared to the previous year, while consumption was also increasing relative to the weather-adjusted average of the four years prior. However, as increasing numbers of schools, manufacturing facilities, offices, and other non-essential businesses closed their doors from the middle of March onwards, we began to see signs that a significant drop in gas consumption could emerge in the coming weeks.

From the middle of March to the middle of April, 97 percent of the United States population will be impacted by some degree of containment measure, with at least 36 percent facing ‘shelter in place’ containment restrictions. These changes in our daily lives will also impact broader energy consumption patterns.

A Drop in Power Demand

In the US and Canada, power generation accounts for approximately 62 percent of overall gas consumption. Given an approximate 22 percent drop in electrical load in Italy, and accounting for the intricacies of the US market, Oliver Wyman estimates that power demand in the US and Canada could fall by up to 20 percent over the duration that containment restrictions are in place. 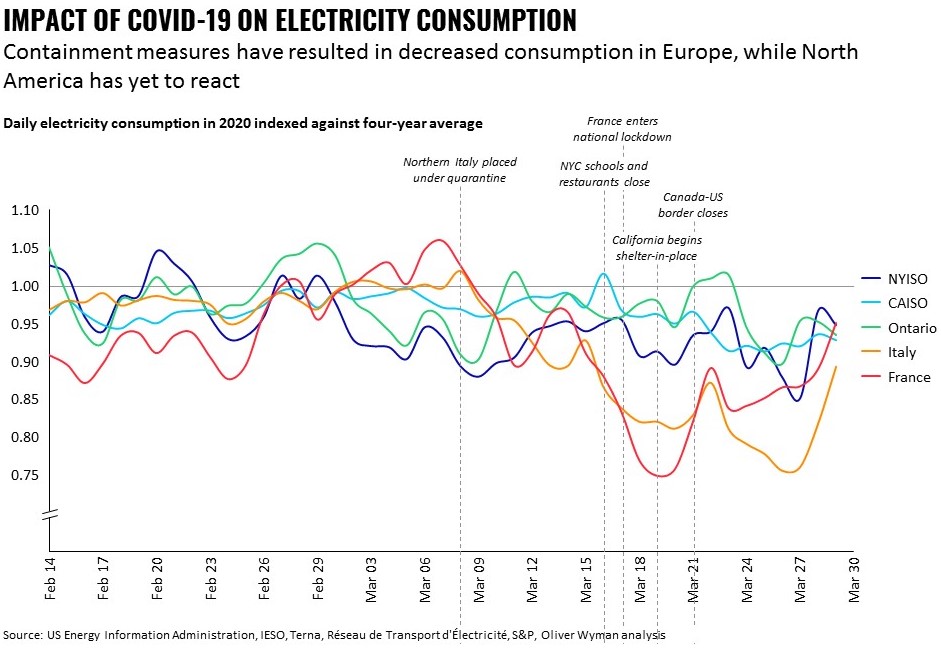 In the US and Canada, gas generates over one-third of combined annual electricity consumption. Oliver Wyman projects that a 20 percent drop in electric demand—coupled with expected decreases in commercial gas demand—could lead to a 15 to 27 percent drop in overall gas consumption in the US over the same time frame. 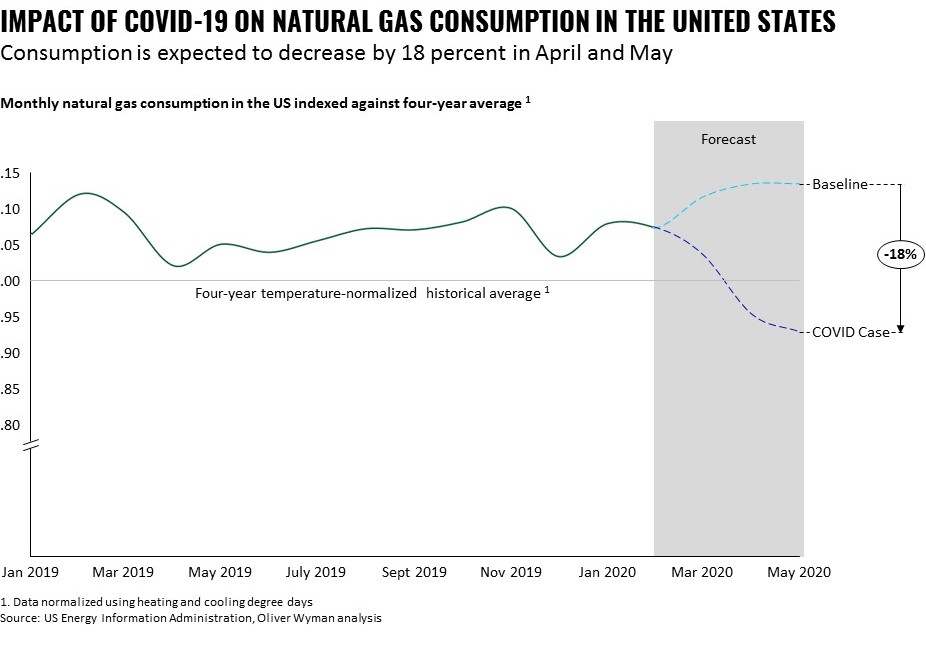 What Producers Can Expect

As was the case in previous downturns, declining gas volumes pose critical challenges for gas producers. Many producers have already taken actions to decrease capital investment—projections for capital expenditures are already down 30 to 40 percent for 2020 as of late-March, and nearly 10 percent for 2021. Making decisions to shut-in wells and pull rigs can be complicated when operators have wells in remote areas and may not be able to get the rigs back when they want to restore drilling activity. Consequently, restart costs also need to be taken into consideration.

Henry Hub and AECO prices have declined at a nearly steady pace since November 2019, falling by over 20 and 40 percent, respectively. Opinions on these changes in demand and the impact they will have on the market equilibrium price are split. 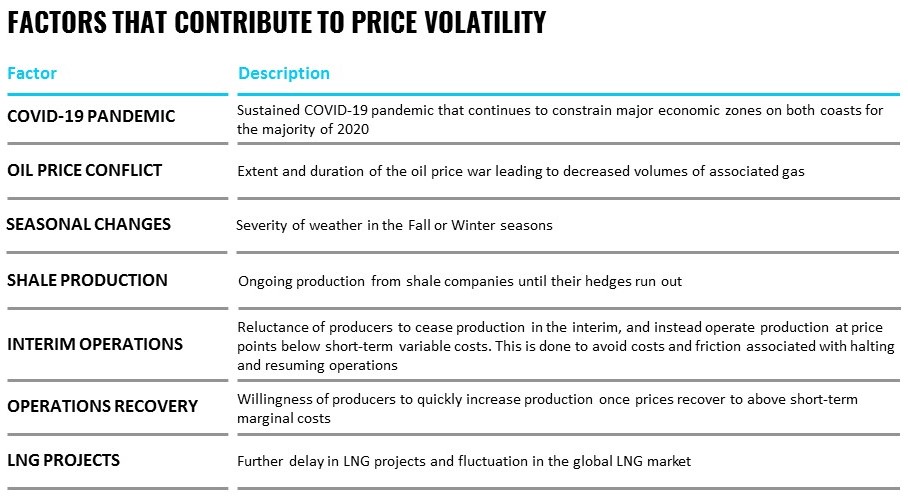 How Producers Can React

The duration of the COVID-19 pandemic and its corresponding demand decreases, combined with price volatility, will be felt across the sector. Based on models used in the Center for Disease Control and Prevention’s pandemic planning, Oliver Wyman has articulated three potential scenarios for the pandemic, which will lead to impacts for the natural gas industry. 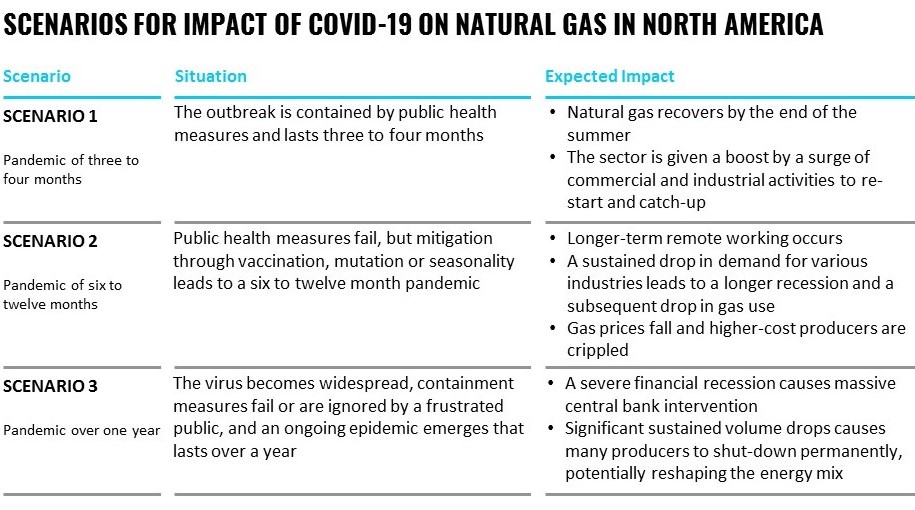 As associated gas production decreases in the interim, there is an opportunity for gas-focused producers to temporarily gain market share. Such volume increases would enable producers to drive economies of scale, secure rigs, and benefit if prices rebound at the end of 2020. Conversely, at a sustained low price, many producers are unprofitable.

While firms may temporarily produce at negative margins in order to avoid restart costs, gas-focused producers could be at risk if price drops sustain beyond several months. Higher-cost producers, for instance, could be acquired by larger aggregating firms, and will need to choose between pursuing aggressive acquisitions and buttressing their own operations to ride out the duration of the COVID-19 crisis.

As the gas industry contemplates how 2020 may unfold, attention will increasingly be focused on optimizing operational efficiencies, optimally deploying limited available capital, and analyzing the pandemic’s role in accelerating or decelerating the Energy Transition. Producers with staying power should also take advantage of acquisition opportunities. Furthermore, forward-looking producers should focus on preparing for long-term growth and profitability by making investments in downstream gas infrastructure.  These could include investments in functions related to processing, midstream operations, and gas distribution, as well as sources of new market growth, such as hydrogen.

The industry will have a turbulent year ahead, but by making the right decisions today, players can position themselves for long-term success.

How Natural Gas Can Weather The Pandemic