Success for IOCs in a low carbon world

The path to decarobisation for oil companies

As businesses across industries continue to decarbonize, integrated oil and gas companies — commonly known as International Oil Companies, or IOCs — are under increased pressure to reduce the carbon intensity of their operations and products and face pivotal decisions on how to redefine their businesses in the coming years.

Decarbonizing sooner will reduce the risk of value erosion for IOCs, and if thoughtful, can position them better than their peers to thrive in the new low-carbon normal. The double-shock of declining demand driven by COVID-19 and tumbling oil prices presents IOCs with a unique opportunity to decarbonize during a time of low opportunity cost in transitioning. With that said, they will need to act quickly to get ahead. 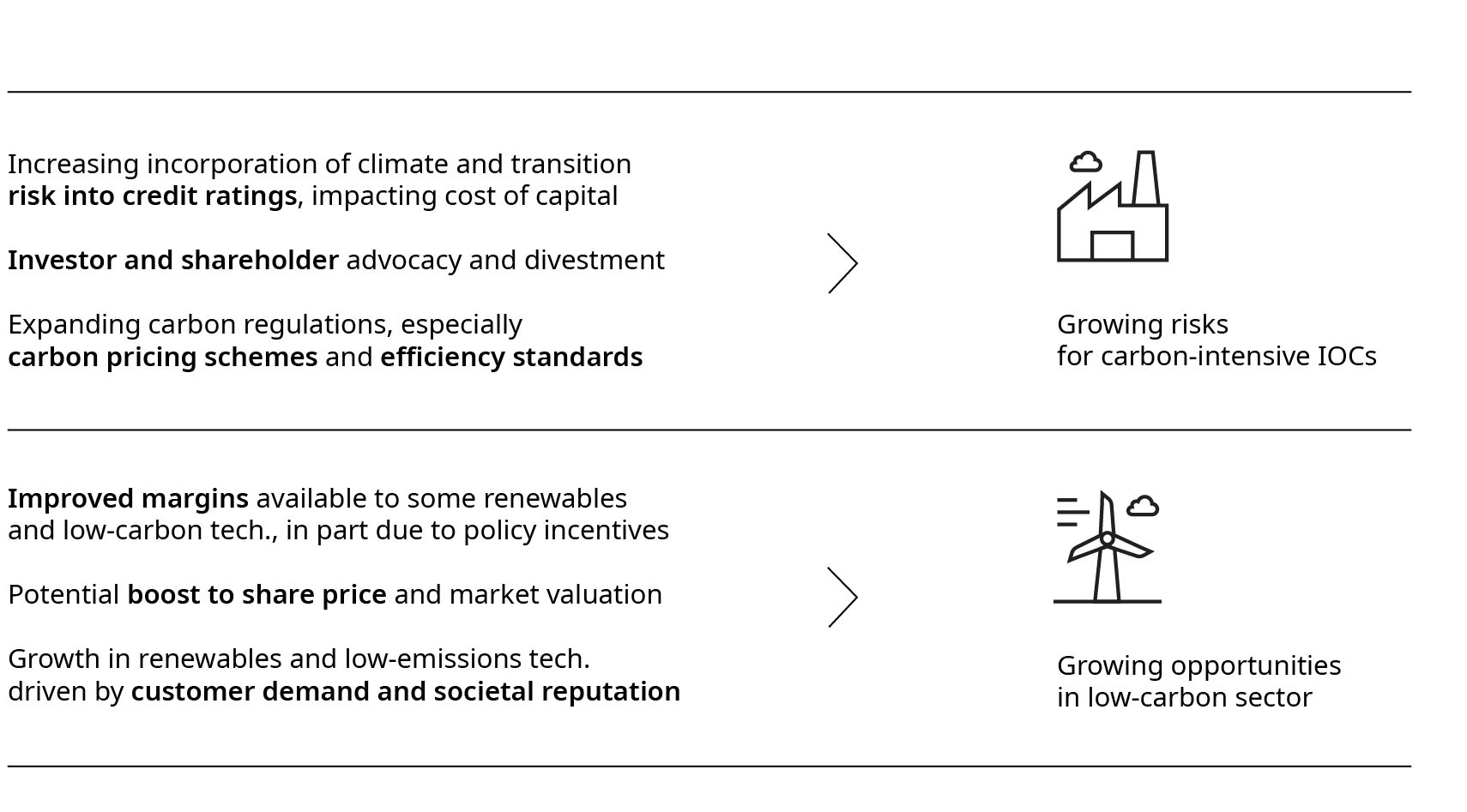 As the financial sector increasingly incorporates climate and transition risks into credit assessments, the cost of capital for high-emission companies is impacted. A study by CDP found that companies not prioritizing decarbonization receive higher coupon rates, especially on medium- and long-term bonds.

Large investors and asset managers now include environmental, social, and governance considerations in their decisions to invest. Some banks and insurers have divested or excluded certain types of oil production in areas such as the Arctic and Alberta, Canada. With Moody’s designating over 700 billion dollars in IOC debt at high risk from carbon regulations in 2018, financial pressure has empowered shareholder advocacy groups to introduce resolutions that push IOCs to decarbonize. Similarly, regulations restricting or taxing continued emissions are becoming more common worldwide.

While investors previously tolerated higher economic risk in fossil hydrocarbons given their higher returns, they are less likely to accept higher risk now that returns have approached those of renewable power. IOCs can also demonstrate a lower opportunity cost to invest in low-carbon renewables now while oil prices are low.

The Low-Carbon Sector Is Looking Up

While economic and reputational risks facing carbon-intensive industries have increased, policy incentives and improved margins for some low-carbon products present opportunities for low-carbon companies. RWE and Ørsted demonstrate that markets tend to reward decarbonization with higher share prices, having substantially outperformed their markets after moving toward becoming renewable energy companies. Between 2018 and 2020, RWE shares increased by one-third after acquiring renewable energy assets from German utility E.ON, and Ørsted’s market capitalization went up nearly 70 percent after becoming a renewables-only company in late 2017. 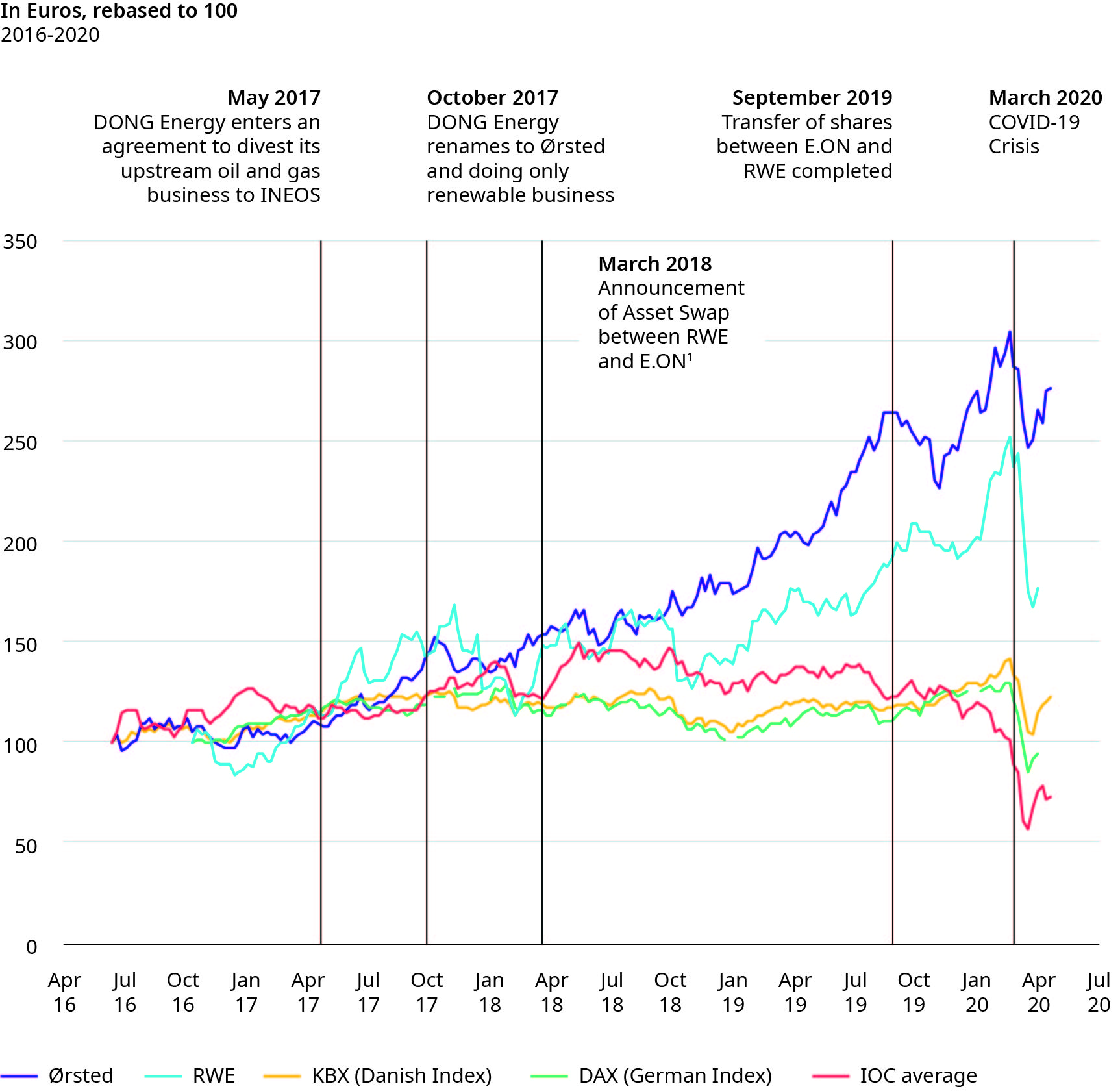 At the same time, customers and society reward decarbonization efforts. Young professionals increasingly seek out employers with strong environmental agendas, while consumers tend to show a higher willingness to pay for cleaner energy products. In addition, corporations and governments have set ambitious sustainability and renewable energy targets, offering potential benefits to IOCs that seek to achieve such targets.

Success for IOCs in a low carbon world